Surprises and Challenges when learning


When I started to relearn tango the landscape surprised me! There were things I thought I could already but when trying they crashed quite totally. Some new complicated figures were just complicated for me but the follower continued taking the cozy old steps. Then we had some old figures I knew very well and could perform with most of the followers but this time we were supposed to do them in a synchronous manner with the partner and this was demanding. Here are some of the issues!

When dancing I never thought of the changes from the parallel system to crusada and back but during the class I became aware of my habit to fix the change by myself. To let the follower's feet fix the change felt like an effort! Now I had to plan it in advance!

I am a leader, born into nuevo tango and there the open, counterposition ochos were the very basic skill. When she was moving to the right my sidestep was advancing to the left. Later on I learned the old milonguero style small counterposition ochos and all that was ok. On nuevo training, the teacher was even astonished that I could make them that well.

So all this in my pocket I wanted to lead this!
(8.44min if the link is failing us!)
In the video, Cristina is walking in line but my teacher wanted us to lead the follower to a series of sidesteps left/right/left, a kind of advancing ZZ. It is a good way to manage the figure in a small space! We did it in the leader tech class and then I was going to lead it on a private but it all was a big splash, crash! For some reason, I wasn't able to lead a follower in one direction and go myself in the opposite direction. I could not find a way to make it work. I was just standing there wondering How come? and What happened? I had done it before, why not now?

I think the enrosques are the most demanding skill a leader can achieve.  He needs to be able to isolate the shoulder, hip, feet movements and have complete control of the upper body and abraso. His frame control is combined with a different pattern in his free leg and foot.  The teachers said that many of these figures are impossible to process with followers if they are not advanced. I wonder if it is true? The follower needs to know the giro and ochos. She needs to be sure, stable on the basics and always reach to the space in front of her leader - that's enough I think!
We will see if I need to change my mind later on . . . .

My early baridas were of the type: stop and drag the foot or let the follower drag my foot. No problem there! This time we were supposed to do it simultaneously in a flow while turning or walking in line. The simultaneous version puts demands on both in the couple, we need to have balance, to be able to stand on one leg and move the other parts of the body freely. We need to come together with a partner to train so we become comfortable with all common variations in different settings.

So some things are standing tall and some collapsed down!
but also
Some found, sound and working! 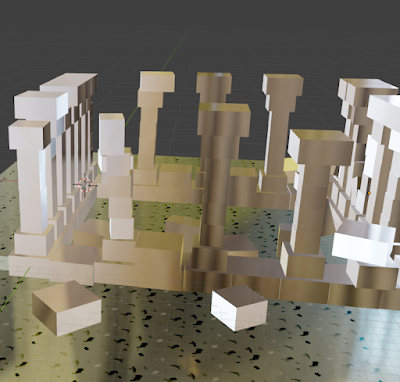 Tango Lesson: Syncopated Snake-Walk & Beyond in Vals
https://youtu.be/510RV8cVEAo?t=524
Posted by She is Leading at 5:07 PM No comments: