When I started to dance, there were no YouTube videos and I didn't have access to videotapes either. The skill and knowledge in our community was the whole universe and the local teachers were the only source of knowledge, our heroes and heroines. We were enjoying our dance!

Things have changed since then and today the best performances are always availble in the net, so my eyes are used to certain standard.  And that little voice inside me is always looking for mistakes, criticising. That little voice is keeping me on the surface, keeping me from experiencing anything.

There has been two situations where this critical voice has been shut up, repeatedly! In both cases the couple was dancing and in their dance the music was more in center than the steps. Suddenly I noticed that it was quiet inside me and I was deeply enjoying the dance.

The third one is this video where an old man is singing in an afternoon milonga. I discovered this clip about a year ago and since then I have returned back every now and then. When I am listening to his song, I get alive inside, somehow his song is giving me an anchor to the deeps inside me. I am touched.

Posted by LeadingLady at 6:47 PM No comments:

I have no musical education so the basic singing and some dancing are the only active experiences of music before tango.

For some reason I started to walk to music and I soon noticed that at certain times the steps got a deep meaning for me. Then suddenly I felt again how ridiculous it was to walk around to music, alone at home. I started to chase these meaningful steps because those steps must connect to the music in right way. I became an intuitive dancer and I mostly placed my steps according to the structures other then basic count.

I had also lost my childhood musical memory so I never knew what was coming next - I felt as if being an audio head in an old tape recorder. This forced me to dance without any plans, but just concentrating on the music sounding NOW. You don't necessarily need to know what is coming next; Followers are actually doing that all the time - they seldom know what movements are coming next. Leader's relation to music is similar as the followers relation to my steps.

For these reasons I was TOTALLY unaware of beat, phrases and the parts of tango.

How was I doing then?
In the beginning of a song I let my body move on the spot and find the music, find the feeling of meaningful movements and then go. Some times I was pointed out as the only (!?) one on the small pista who was stepping on the beat all the time. I got positive feedback on my phrasing and my dancing was great fun for followers too.

But to participate on a musicality workshop was a living hell to me!
Walk on beat .......? Walk only on 1 ....?? I was painfully aware of being different, I was out. I tried to look how others were doing and asked my follower. The last two years of that period I was aware of that others heard something very vital in music, but what? I couldn't form a question and nobody asked me how I was doing.

About two years ago a tango friend gave me Joaquin Amenabars book Tango:Let's Dance to the Music! I started to do the practical exercises and two weeks later I heard first time the beat - I was totally exhilarated! Totally! Several years of frustration was canalised in work with that book. I have done it several times alone and several times with tango friends.

But there is one big devil!
My early tango was magical, something between my body and the music. I did not have control of it, the first time in my life my aware brain did not have anything to say when the feet were dancing. Quite interesting, nice!

I was and I still am afraid of that the musical training changes my dance to some kind of mechanical step machinery. Therefore I try to balance the technical drills with other exercises to keep the magical, emotional side strong enough
Posted by LeadingLady at 10:50 AM 3 comments:

something about the Stages of tango

I started to dance tango 1998, which makes me ancient compared to many in our community. When I have looked  back over these years I have had a blurred feeling of passing through different stages since I started. But for some reason this feeling has never manifest itself in writing until two weeks ago when I in the middle of a facebook discussion put it in this way:


"I put it a little bit simple here, but at the beginning and intermediate level I needed a follower. If she didn't understand my lead and did something else => there we were standing, loading for a fresh start.

Today I need a partner - a mentally strong follower with her own musicality. If she misinterprets my lead, we just go on dancing, it doesn't have impact on our flow. If I don't *feel* her presence in our dance I feel lonely.

This subject seems to be in the air today because a few days later I found a picture describing the 5 stages of tango. It is well done with thoughts quite correct and visually beautifully formed. It is a very good aid to stimulate your own thoughts about what you have passed by and the joys you’ll have in future.

I'm sorry that the picture is not readable, please follow this link! (Ctrl + and it gets larger) 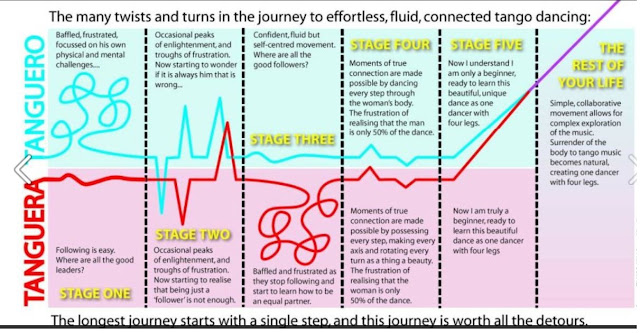 If we were able to form some kind of shared understanding of development stages for tango it would be easier to discuss. Today many of our discussions are confusing because we mix the details from different levels during one occasion. In my opinion the feeling, experience, thinking and performance of tango phenomenons are different at different levels.
I hope we will some day in future have a kind of shared understanding!
Posted by LeadingLady at 5:36 PM No comments:

A personal variation at an undefined stage


An unexpected change has occurred in my dancing habits. Through all my dance years I have been very independent, heading to the practicas and milongas without knowing who will be attending. There was always people to fill the hours with wonderful dance.

But not anymore! Today I am painfully depending on my most nearest dance partners. Last week I made an effort and went to a wonderful outdoor milonga knowing that my main partners were out of town. I was mingling around and I asked for one dance but that was it! I didn't got the urge to dance. I was chatting some more and then I left for home.
....................never happened before.
Posted by LeadingLady at 4:43 PM No comments:

During the entire last year I was following about a half a dozen tandas. That's not much and I can tell you my following is rusty. I have though plans for a slight change here and therefore I did accept a few follower tandas when I was asked in Finland at Tampere festival.

I was like seaweed in storm chasing my balance! It was fascinating. I know that I have good balance as a leader and on my ballet lesson I can stand on my toes in pose and keep my balance for a moment. So it can’t be a balance problem, but WHAT is it then?

The only reasonable suggestion I came up to was: Did I load my steps with incorrect amount of energy?

Think of this situation: You are running and then suddenly you must stop. And there you are waving your arms, moving your whole body and trying to absorb the surplus energy. I am sure you know the situation!

I think now that my balance problem actually was an inablility to give my step the right amount of energy as well as my inability to effectively take care of the surplus of energy.

I think that the experienced followers are really good at allocating the right amount of energy for every single step and it gives them soft and effortless flow of steps. If they misunderstand the lead they can effectively absorb the surplus energy or add some more if needed!

Those abilities I had lost during the years I was following so few tandas.

Addition 15.08.2012
Many followers are talking of balance problems. I think we could help me/them by finding some exercises how to more exactly read the lead and how to alternate the strength used for the steps.